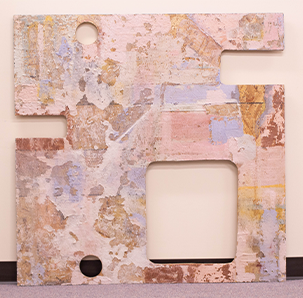 Deterritorialization has displaced social and political structures. Unorganized approaches to nonlinear systems have allowed for conversations about diversity to be further expanded upon, but have also caused their own territorial reactions. Specific to feminism, the polarization between binary ideas relating to nonbinary gender ideals have an almost stagnant conversation about equality.

I have found it necessary to find some comfort within the societal mess I have inherited and contribute to. I struggle to focus on smaller issues I may have the capacity to control, such as my own self-awareness. Instead, I compulsively generate pieces that are able to be displayed in innumerable ways that speak to large scale, societal ills. Stepping away from my personal bubble, discrimination towards differing genders, races, sexualities, religions, and social classes invade my physical and digital spaces. My anxiety towards being over-exposed to the world’s issues is manifested through inanimate objects or images that are able to be endlessly rearranged. The way in which I assemble ceramics and paintings display the diverse manifestations of hierarchies I witness among people and systems. The multiplicities of my work help me clarify personal beliefs and previously experienced surroundings through the visual vocabulary of abstraction.

My sensibilities result in an excessive output of work. Within the overflow, coherence requires a sense of unification beyond culturally established, superficial differences. There is an absurd, almost humorous manner in the way humanity connects with one or excludes another. Indulgence in social vulnerability as a cyclical process opens the “self” up to acceptance, but also great disconnects. Faulty bonds I may enter into, evolve into insincerity. I become conscious when a dynamic is artificial. Despite the recognition, I manufacture effort in order to remain within a social domain. Navigating my reaction to this type of simulated relationship is a lens in which I observe human interactions.

Handling each piece as a vehicle to a larger installation—rather than an ending point— allows me to push together similar forms that I have made disparate. These groupings need to be constructed for my own sake, for visually making sense of the world. Reflection on the “self” helps establish a singular perspective out of current social climates. Constant confrontation, irony and upheavals of certainty are an improvisational dance. It never rests.