From an experiment in education to Wisconsin’s Polytechnic University, learn about UW-Stout’s past. 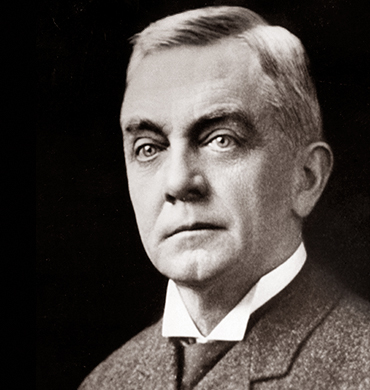 If James Huff Stout were to return today to the institution he founded in 1891, he wouldn’t recognize most of the campus; nor would he be familiar with the specialized majors offered by what is now University of Wisconsin-Stout. Yet, upon close examination of the university’s current mission, he would undoubtedly conclude that the spirit of his forward-looking vision lives on today.

James Huff Stout was born and grew up in Dubuque, Iowa. He entered his father’s lumber business at age 19, spent some years in Reads Landing, Minnesota, and Washington, D.C., and then settled in Menomonie, Wisconsin, where he resided for the last 20 years of his life. Today the name Stout is readily associated with the University of Wisconsin-Stout and with the Knapp-Stout lumber company. While Stout’s principal claim to fame lies in his laying a foundation for a great university, his prominence in other Wisconsin and national affairs has largely been forgotten.

The neglect of these contributions was due in part to his own unassuming posture and seeming avoidance of public praise. During his residence in Wisconsin, he accomplished a great deal in educational change, the development of libraries, the “good roads movement,” and in other progressive enterprises. He was a civic leader and served as a state legislator.

Admittedly, Stout was able to accomplish much of what he did by means of his wealth. The exploitation of the great white pine forest of northern Wisconsin yielded significant fortunes for the families involved in the Knapp, Stout & Co. Company. Stout used his money to improve the quality of life for those less fortunate.

UW-Stout is a monument to the man and his ideas – the only institution in the UW System named for an individual.

What’s in a Name?

“That which we call a rose by any other name would smell as sweet...”
- Romeo and Juliet, Act I, Scene 11

If Shakespeare is correct, the modern version of the school that James Huff Stout founded could be called anything, and its value would not be compromised. But at several points in the school's history, its name changed, either as a sign of a change in administration or as an attempt to change the image of the institution.

Under the auspices of the Menomonie Public Schools, James Huff Stout funded various educational enterprises. In 1891, manual training and domestic science training was introduced through the Stout Manual Training School. 1894 brought the introduction of kindergarten classes. In 1899, the Kindergarten Training School began to prepare kindergarten teachers. A School of Physical Culture opened in 1901, which provided physical training. In 1903, training schools for manual training teachers and domestic science teachers were added. By 1907, a Homemaker's School had opened and a trade school was planned.

To simplify administration and clarify ownership of and responsibility for the various public and Stout Training Schools, The Stout Institute was formed in 1908. The institute was designed to “provide facilities in the way of buildings, equipment, and teachers, through which young people of both sexes may secure such instruction and training in industrial and related lines of educational effort as will enable them to become efficient industrial, social, and economic units within their environment.” In 1911, following Senator Stout's death, ownership transferred to the State of Wisconsin.

The Stout Institute Board of Trustees was abolished, and the institution came under the jurisdiction of the Board of Regents of the State Colleges, a move that the institute board resisted, fearing a loss of prestige from being a special college. In retrospect, joining the “League,” as President Fryklund expressed it, proved to be a distinct advantage to the school and its faculty.

The name change to university was authorized by the Board of Regents who believed that the “state colleges had reached another plateau in their development.” Increased enrollment brought new and enlarged facilities. A traditional focus was maintained even while new majors were added and new directions were given to established majors.

University of Wisconsin-Stout » 1971 to present

The Wisconsin State Universities and the University of Wisconsin campuses merged to form the University of Wisconsin System. Stout was designated by the Board of Regents as one of only two special mission universities in the UW System. Stout was to offer focused programs “related to professional careers in industry, technology, home economics, applied art and the helping professions.” In March 2007, UW-Stout was designated “Wisconsin’s Polytechnic University” by the UW System Board of Regents.

Located in UW-Stout’s Robert S. Swanson Library and Learning Center, the University Archives mostly houses historically valuable records of the various campus departments and offices. Personal papers of Stout alumni, students and faculty are also in the collection, as well as the records of Stout organizations. An electronic database allows for name and subject searches of many university publications.

Stout's Leaders Through the Years