In the third edition of the textbook “Family Ties and Aging” co-authored by Ingrid Arnet Connidis and Amanda E. Barnett, University of Wisconsin-Stout associate professor of human development and family studies, Barnett dedicates the book to her late grandmother, Elizabeth Trowbridge, who showed her how to age with grace and style.

The book, on the intersection of family relationships and aging, was published in October and is available on Amazon and at Sage Publishing. “What makes this book unique is it doesn’t focus on a problem such as elder abuse or challenges in long-term care financing,” said Barnett, a family gerontologist. “This is about relationships and the wide range of experiences of older persons and their family ties. We continue to have relationships in later life, and they are important. Relationships early in life affect relationships later in life, and they affect both physical and psychological well-being.”

Seeing her mother become a caregiver yet strive to help her grandmother stay independent as long as possible helped Barnett develop an interest in aging. “There are challenges with independence, feelings of dependence and caregivers not having enough support themselves,” Barnett said. “They can feel lonely and overburdened.”

However, there was a positive outcome too. “My mom’s relationship continued to grow with my grandmother,” Barnett said. “Caring for my grandmother is something she says she will never regret. I got to see what being a caregiver looks like. It is possible to care for a loved one in a dignified, compassionate and caring way.”

Barnett became involved in the third edition when Connidis started looking for a second author to help update the book, which is used across North America and beyond by researchers, instructors and policymakers.

Barnett was found through her faculty web page by Sage Publishing and asked if she would want to write a proposal for Connidis. “I have been very fortunate,” Barnett said. “She is a wonderful mentor.”

Barnett started working on the 488-page book, during her spare time, in spring 2016. 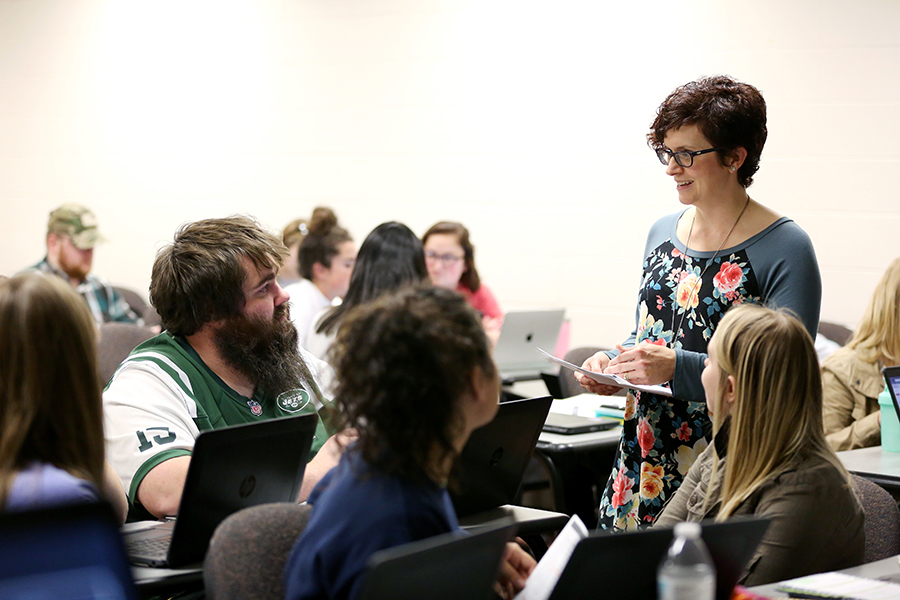 Leah Faiad, who graduated from UW-Stout in May with her master’s degree in marriage and family therapy and works as a therapist in a group private practice in Andover, Minn., was Barnett’s graduate assistant and assisted with the book in the 2016-17 academic year. Faiad was paid through the College of Education, Hospitality, Health and Human Services Student Research Support Initiative.

“I was drawn to work on this project with Amanda due to the evident need of our society, academic organizations and research institutions to emphasize such a vital part of family science,” Faiad said. “The aging population and corresponding research are often overlooked due to ageism and related systemic implications.

“Family Ties and Aging brings a much-needed research-based and refreshing outlook on important aspects of this population. What stands out about this text is its ability to be visually appealing and straightforward. Textbooks often have a stereotype of being dry and difficult to comprehend. However, I believe the organization provides life and zest to a topic that is often overlooked and misunderstood.”

She said the book is useful for a variety of postsecondary academic levels, and she liked the personal touches, including hand-painted cover art by Connidis and family photos from the co-authors that correspond with book topics.

Often, people simplify aging as death and dying and think of families as only those units with young children, Barnett said.

“We forget about siblings later in life. Many people start dating later in life after divorce or widowhood. There is a myth, bias or stereotype that those who don’t have children or grandchildren are lonely late in life. The research doesn’t necessarily support that. Older persons who don’t have children are making their own meaningful kin networks.”

Research shows that people in their 60s with grown children tend to become closer to their siblings. “Siblings are reconnecting; they are finding more opportunity to be together,” she noted.

The book addresses gay, lesbian, transgender, queer and plus relationships, which are evolving since same-sex marriage became legal in 2015. “In the past, older generations were less likely to come out or didn’t have the opportunity to marry,” Barnett said. “We think we will see, as the younger generations age, more acceptance and less stigma.”

Seniors sometimes are stereotyped as needing care from their children, but that often is not the case. “Parents are helping children,” Barnett said, such as financial and emotional support. “It is much more common for resources to go downward than for resources to go upward across the life course. Parents want that next generation to do well.”

Barnett believes there is interest in family and aging because everyone is aging. “We are all living it,” Barnett said. “It can be a time of growth and opportunity.”