Cabot executive on sustainability: You can make a difference

Denise Coogan is quick to point out she personally generates more trash than Subaru Indiana Automotive.

“I put more in the landfill from my home than we do at the facility,” said Coogan, the Environmental Partnership manager at Subaru of America and the 2018 Cabot Executive in Residence at the University of Wisconsin-Stout. Coogan spoke on Wednesday, Oct. 24, on “Building Momentum for Success in the Face of Adversity.”

The 4.5 million-square-foot Subaru Indiana Automotive building, on 832 acres with 5,700 employees, has sent no waste to landfills since May 2004. The effort started with a commitment to reduce waste, reuse what they could and recycle what is left over, Coogan said. 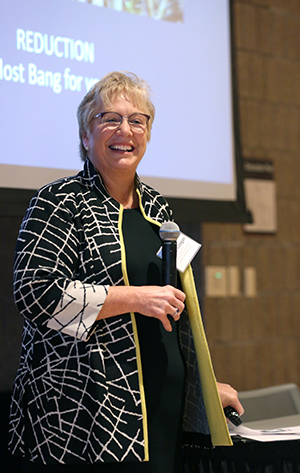 Working with employees and listening to their suggestions helped drive the ability of the Subaru Indiana Automotive to reach the zero waste goal, Coogan said. She cited some examples, including optimizing the coils of steel to about the size of a stamping run; saving about 102 pounds of steel per vehicle; and reusing the Styrofoam that engine parts are packed in when shipped from Japan by sending the packaging back for the next shipment. The efforts save the company $1.3 million a year.

Subaru is working on a national parks project to help reduce the 100 million pounds of garbage generated each year at the parks, Coogan said. A pilot project to reduce waste is being conducted at Yosemite, Denali and the Grand Teton national parks.

In 2014 those parks generated about 16.6 million pounds of garbage, enough to fill the Washington Monument 62 times. One of the goals is to encourage park visitors to bring reusable water bottles, mugs and bags, which would reduce waste from 20 ounces per visitor to about five ounces. Having standardized labels for recycling containers is another goal as well so that all visitors recognize the bins.

Chancellor Bob Meyer said it was a wonderful opportunity to have Coogan on campus to speak and meet with faculty, staff and students. “The expertise she has is unique and very specialized in sustainability, which the university and many industries are interested in focusing on.”

Scott Cabot, who earned a bachelor’s degree from UW-Stout in 1978 and a master’s degree in 1979, started the Cabot Executive in Residence program, now in its 34th year, in memory of his father Arthur R. Cabot, a successful pet products manufacturer. “My father found great satisfaction in sharing his experience in entrepreneurship and business with young people,” Cabot said.

Subaru is working on how to design vehicles for sustainability, ensuring they can be completely recycled at the end of their lives. Cars also will have to be zero-emission because that’s what younger consumers want, she noted. “At the end of the day we all breathe the same air,” she said. “We all drink the same water. We all need to learn from each other.”

Abbey Ketz, of Clayton, a senior majoring in business administration, said she liked hearing from Coogan how taking small steps can help the planet. “It definitely made me think about what I need to do personally,” she said.

Kim Martin, of Turtle Lake, also a senior majoring in business administration, agreed. “This was eye-opening on the little things you can do to reduce waste,” she said. “She was a very good speaker. She was very insightful and inspiring.” 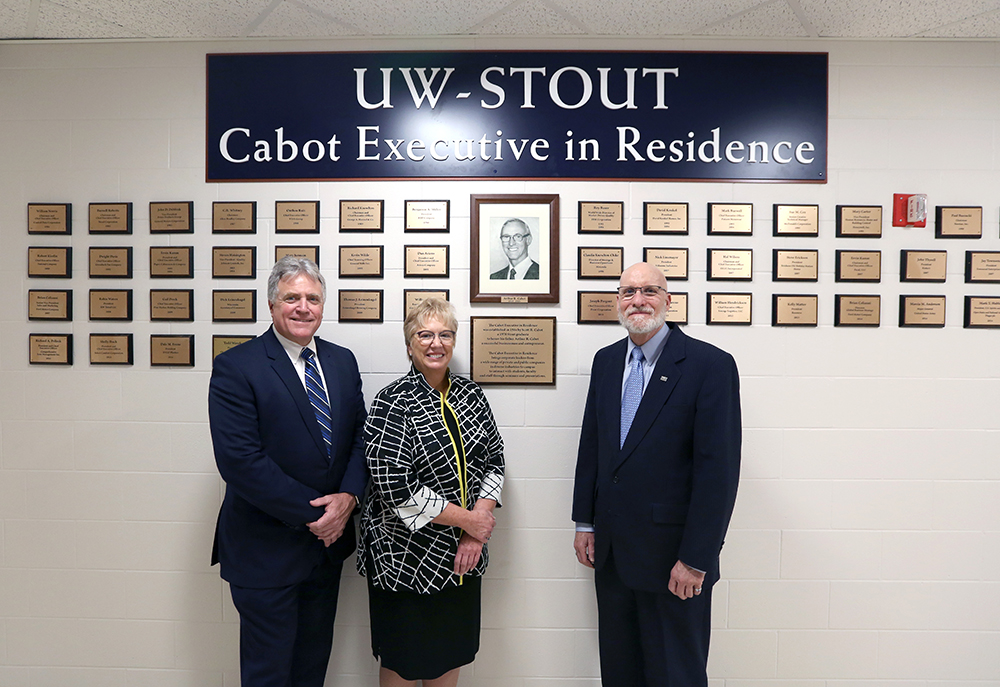 Coogan praised UW-Stout’s efforts on sustainability, saying she was impressed by the number of recycling bins and what was being recycled. UW-Stout’s sustainability efforts, through Sustainable Stout, include composting, recycling, reducing energy use, promoting sustainability in the curriculum and green transportation initiatives. In 2017, the university was named to Princeton Review’s Green Colleges list.

Denise Coogan, center, pictured with Chancellor Bob Meyer, at left, and Scott Cabot at the UW-Stout Cabot Executive in Residence Wall of Honor.