Room, open to campus and community, stresses team-building
UW-Stout student Chia Lor looks through clues at the Jurassic Stout escape room as her teams battle the clock and save Menomonie. / UW-Stout photos by Pam Powers

University of Wisconsin-Stout has a colossal chomping challenge for students, staff and the community with its first escape room, Jurassic Stout.

Up to nine-member teams must solve a series of puzzles and riddles in multiple rooms to restore the power before, hypothetically, back-up generators run out and release dinosaurs from their enclosures into the Menomonie community.

The escape room is a physical adventure game where players use clues, hints and strategy to complete the task in 45 minutes or less, said Adam Ludwig, assistant director of University Housing. 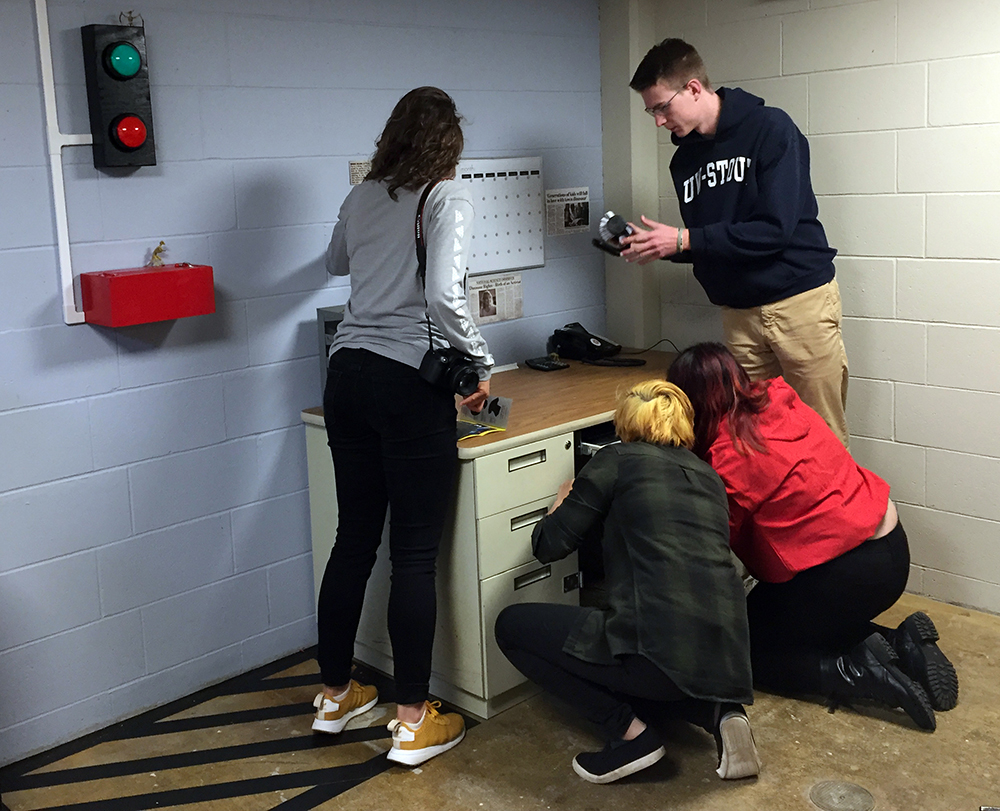 Jurassic Stout is in the lower level of CKTO Hall in an area that was a radio lab. It opened in early November and continues Wednesdays to Sundays through Sunday, May 5. Times available are Wednesdays through Fridays at 7 p.m., Saturdays 1 and 3 p.m. and Sundays 3 and 5 p.m.

“We’re always looking for unique ways to engage our students. The escape room builds team and leadership skills,” Ludwig said, noting students will staff the room. “The goal of many commercial escape rooms is to get you to come back,” Ludwig said. “Ours is looking at team-building skills. It’s also something for people to do on the weekends.

“It is a moderate challenge,” Ludwig added of the escape room. “There are many puzzles to solve, keys have to be found, there are alpha-numeric locks and digital locking mechanisms.” 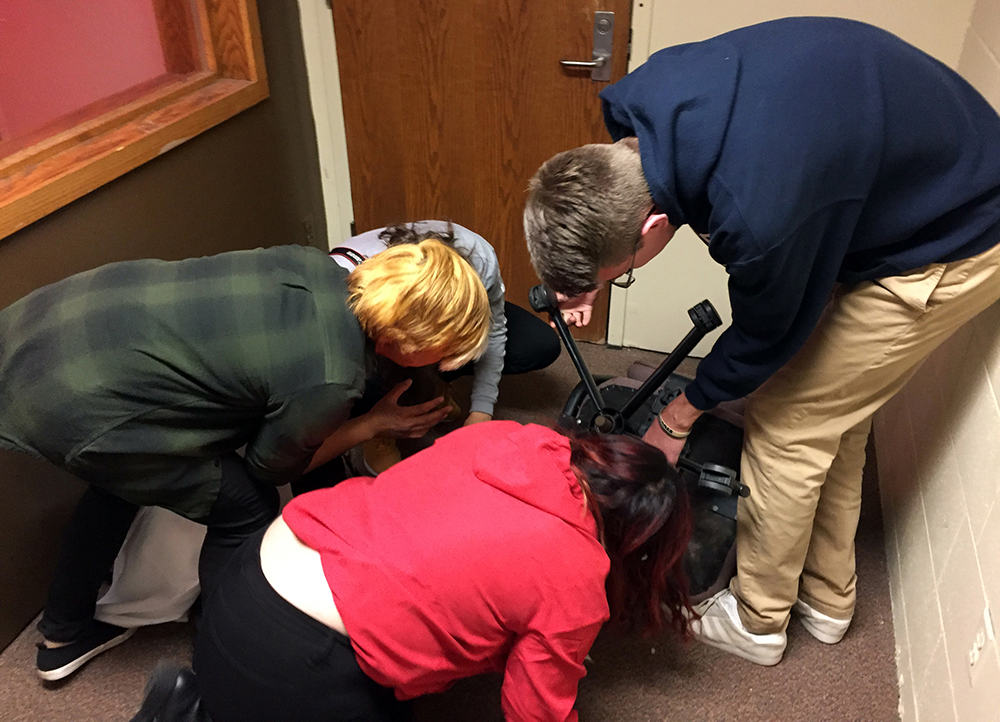 Four graphic design and interactive media majors, who work for housing, recently scaled the challenge of Jurassic Stout. The team —  Chia Lor, of Hudson, Sam Giesregen, of Lakeland, Minn., Theresa Hang, of Shakopee, Minn., and Nicole Juza, of Manitowoc, — managed to escape, requiring a few hints and little extra time. Ludwig served as their guide, greeting them and introducing them to the room.

Lor, who has been to two other escape rooms, thinks Jurassic Stout is well-designed. “The biggest challenge was how many locks there are,” Lor said, laughing. “It’s good for team-building. You can bond with friends and co-workers. I thought we did really well splitting up and working in pairs.”

Giesregen said he enjoyed Jurassic Stout. “I’m not super great at escape rooms,” he said, noting he has taken part in two other rooms. “I feel like I’m the one distracting other people. I am glad we got it at the end.”

He encourages others to try their puzzle-solving skills in Jurassic Stout because it’s right on campus and economically priced.

Hang, who had never participated in an escape room before, said it was exciting. Hang envisions taking the teamwork skills learned back to the housing office. “You see how people react to stress, who takes a leadership role and who follows,” Hang said. “You learn how to communicate with each other under stress. Sometimes it was hard to get everyone on the same page.”

Juza, who also had never been in an escape room before, said it was great fun. “It was so intense, and we were so focused,” Juza said. “It was awesome.” 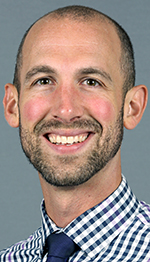 Ludwig wants future campus escape rooms to be developed and designed by art and design, construction, and game design students. “We see some great pairings with majors and students, and we can have escape rooms built and dreamed by students.”

Plans are underway to have an escape room for summer camp conference groups. The room is slated to change each semester, starting next school year, Ludwig said. 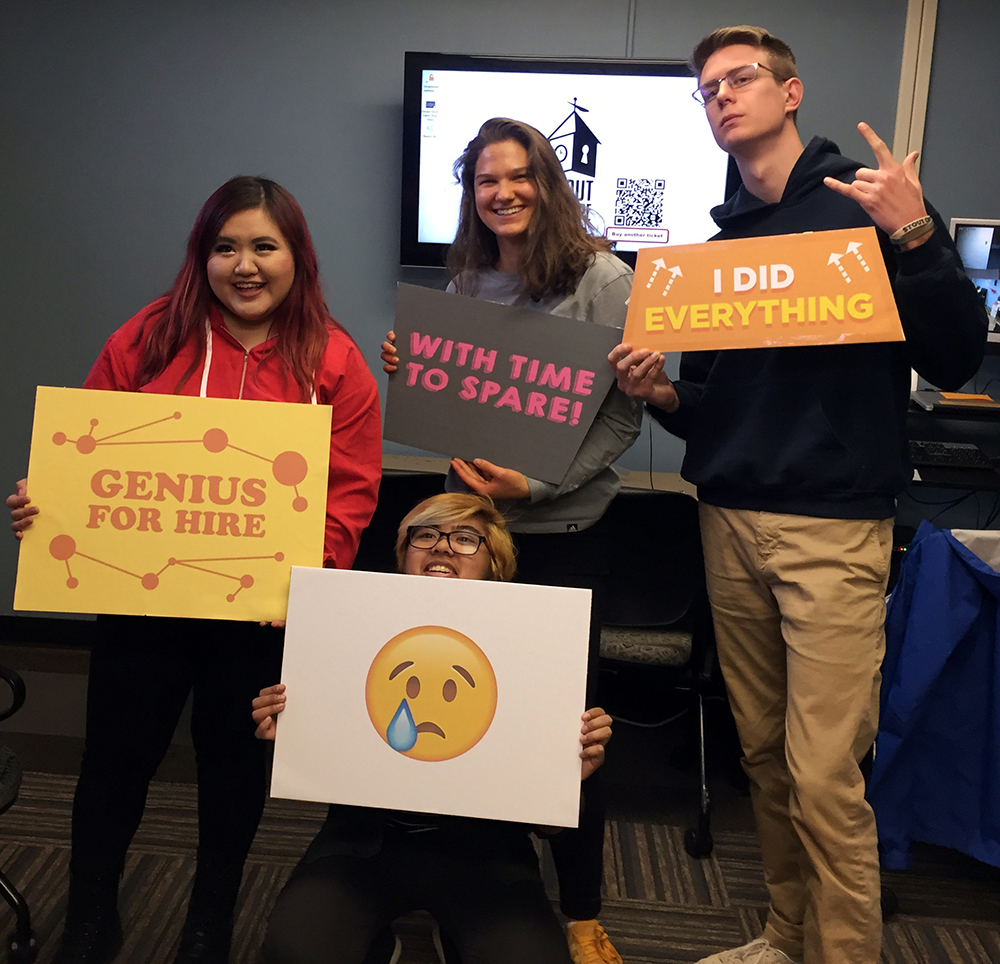 Adam Ludwig previously was involved in building another escape room, a mobile escape “with all the puzzles contained in a suitcase to prevent an evil librarian from stealing all the patrons’ voices.”

He enjoys the competitive aspect of the rooms. “You are immersed in this hypothetical, high-pressure environment. “It challenges you to think critically in that space. I like working with people. I think it is a testament to how you communicate with others.”

The team searches under a chair for possible clues in the escape room.

After the team escaped from room they posed for a picture to celebrate their accomplishment. From left to right standing are Chia Lor, Nicole Juza, Sam Giesregen and sitting is Theresa Hang.