Future teachers see experience as one they could incorporate in classrooms
UW-Stout mechatronics students compete their suomo bots during a recent class. Students built and programmed and then competed in a 3-foot diameter circle. / UW-Stout photos by Brett T. Roseman

A cheese grater became the chassis of one robot at a University of Wisconsin-Stout class as students battled for the bragging rights of having their bot survive in the competition ring.

Students in Kevin Dietsche’s Mechatronics 371 class built and programmed the sumo bots and then competed against each other in a 3-foot diameter circle. Bots that became disabled or were pushed out of the circle lost.

Technology education major seniors Bryce Jaglinski, of Wausau, and Alex Lutz, of West Bend, built the bot they called Helli-chopper for its whirling metal blade that served as both an attack weapon and defense apparatus.

“I came up with the cheese grater,” Jaglinski said. “I wanted something light but strong. If we made it too heavy the battery would drain too quickly. If we didn’t make it strong enough, the others would disable it.” The team cut the metal blades themselves. 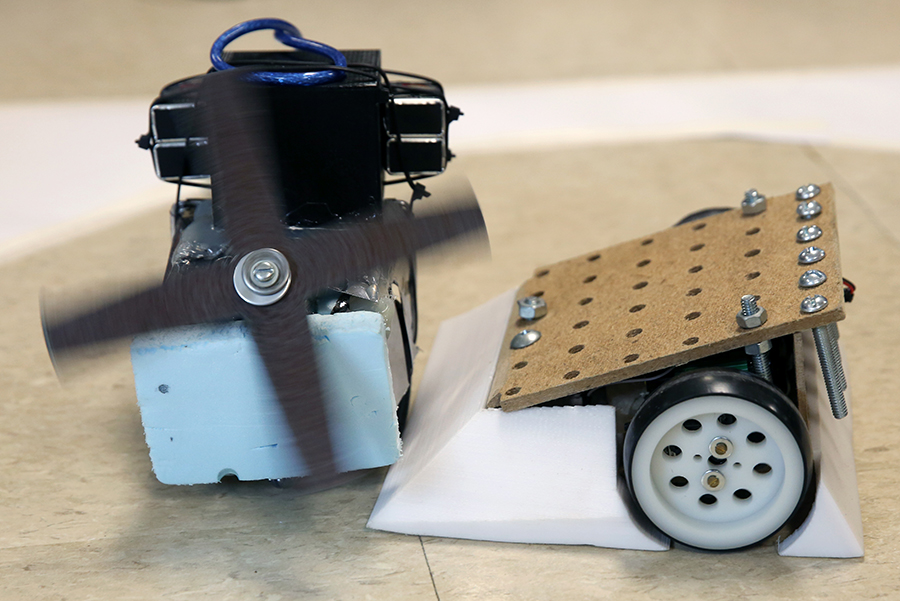 The bots had to weigh less than three pounds. Helli-chopper weighed just over 2.1 pounds. Similar to television shows such as “BattleBots” and “Robot Wars,” some of the bots used plows, spatulas and even a butter knife as offensive and defensive weapons. Unlike TV counterparts no water, liquid, chemical, electrical, compressed gas, untethered projectiles or other potentially dangerous weapons were allowed in the competition.

Lutz, who plans to be a teacher after graduation, said the project helped him learn computer coding. “This is a project I could see myself doing as a future teacher,” he said. “There is a lot to learn with it including coding, wiring and building with a variety of materials.”

This is the second year the class has done the sumo bot project, said Dietsche, a lecturer in the engineering and technology department. “It is basically kind of a dumpster dive project,” Dietsche said. “They have to be a bit creative, and they have to work with programming. They are all going to be high school or middle school teachers eventually. I do see this as a project they may want to try in their school.”

Students use many of the labs on campus to build the bots, learning from other students and learning how to collaborate, Dietsche said. “They are excited about it,” he noted. “They are having fun.” 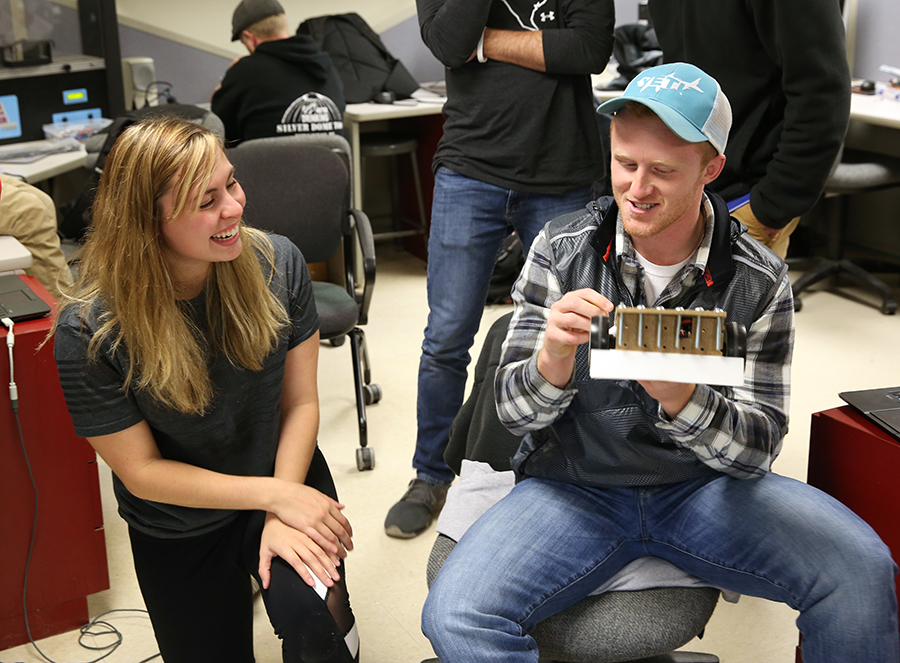 Pearson used a 3D printer to create the body of the bot, which was built low to the ground and weighed in at nearly 2.6 pounds. During the battle, the Legendary White Ram hit the Helli-chopper, broke off the metal blade and shoved it out of the arena.

During the competitions, students encouraged each other and laughed as their bots lost, talked with each other on possible improvements and shared tools and batteries.

“My goal with this was to come under and use the traction of our wheels to push them,” Pearson said of the Legendary White Ram. “I like the creative aspect. You get to design your own bot. There is a lot of freedom.”

Rocque said she learned how to design a bot and how to code it. “It’s fun,” she said. “In the middle of November, you want to have a fun day. It’s competitive, but everyone is willing to help each other.”

UW-Stout offers a Bachelor of Science in technology education and one in engineering technology.

Beth Rocque, at left, and Drew Pearson, both technology education majors, talk over a quick fix on their bot Legendary White Ram made using a 3D printer.