The first snowfall of the season recently made Dylan Prescott smile as he spoke at University of Wisconsin-Stout for Native American Heritage Month.

“As Ho-Chunk people we are only allowed to tell stories with snow on the ground,” he explained. 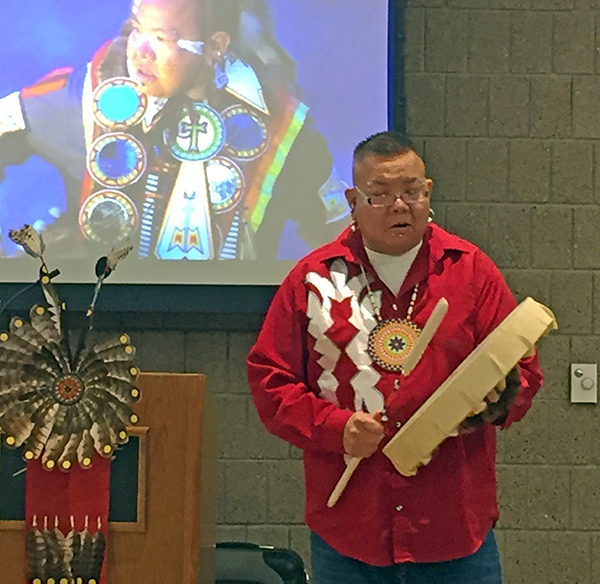 Prescott shared, as part of the event sponsored in early November by the UW-Stout Native American Student Organization, the importance of oral history to Native Americans.

He started with a story of his ancestors who in a vision saw a large lizard with a pig snout that would eat everything in its path, churning dust into the sky and water, which Prescott said was the Transamerica railroad.

“The story I just told you, you’re not going to read about it on the internet or in a book,” said Prescott, who is half Ho-Chunk and half Potawatomi. “These stories are told from our great- great-grandparents on down.”

Prescott, 42, of Wausau, started sharing his people’s stories when he was 18. “We are an endangered species,” he said of Native Americans, noting they make up less than 1% of the population. “Part of the reason I come to talk to people is because we are still here. To me being Native American is being human. Help someone. Care for someone. Love everyone, everything.”

Showing an eagle feather, Prescott noted the feathers are used at powwows and in prayers. “If you ever see an eagle, it keeps a balance in life,” he said.

Balance is important to maintain, even for Mother Earth. “Everything we eat and drink comes from her,” he noted. “Everything we have to keep us out of the elements comes from her. She’s alive just like us. She has a heart in her core. The water is her veins. The crust of her earth is her skin.”

As woodland people, the Ho-Chunk built wigwams from birch bark and wood. “Our dwellings were made to go back into the Earth,” he said.

Passing around a medicine wheel, Prescott said the wheel helps depict the four directions of the Earth and the four earthly elements of wind, fire, air and earth. Colored white, black, yellow and red it represents the four races of people.

Showing cloth with a Ho-Chunk applique on it, Prescott explained the design has balanced sides despite showing a sometimes crooked path. “In life, we are supposed to live in balance,” he noted. “If you get out of balance, you have all the opportunities to get back a balance.”

Another event was with Elena Terry of the Ho-Chunk Nation, an executive chef and founder of Wild Bearies, a catering business that blends indigenous cuisines to educate others about food as medicine.

UW-Stout NASO President Ariana Bourdon, a junior majoring in supply chain management and business administration, said it is important to share Native American culture with the general population. “It’s also important to show there is a big variety of us,” she noted. “There is not just one way to be Native American.”

Sharing food helps reconnect to ancestors and the history of Native Americans, she added.

Many Native Americans have fallen out of balance as they still struggle in society and may use drugs and alcohol, Prescott noted. High blood pressure and diabetes plague Native Americans because they are not used to salt and sugar, Prescott said. “We were hunters and gatherers,” he said. “A long time ago we didn’t eat every day.” 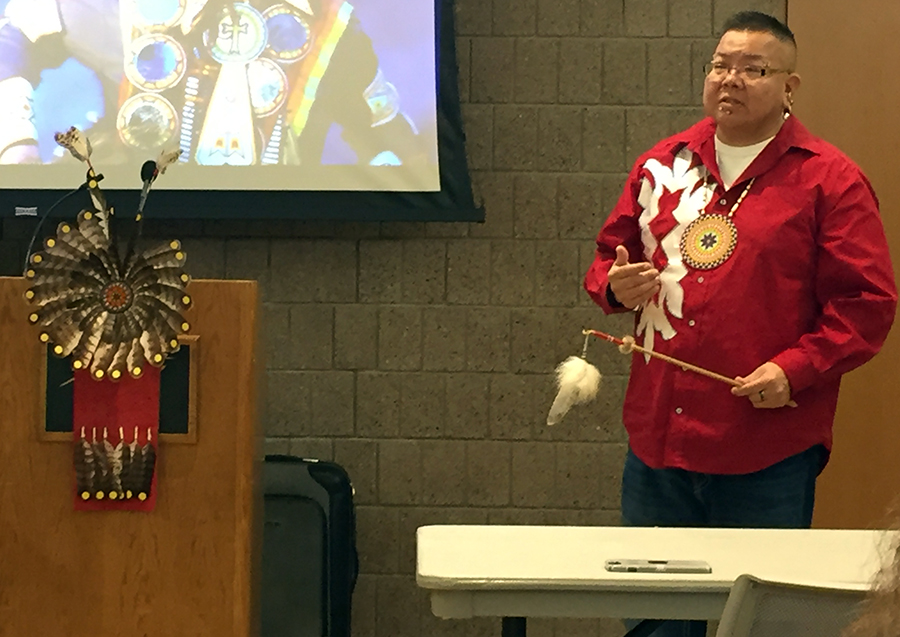 Holding up a traditional headdress made from porcupine guard hair and white deer hair, Prescott explained that the headdresses protected and reminded them that they needed to be on guard and aware of the danger.

Playing a traditional drum, Prescott noted the beat is that of a heartbeat, which is in all living creatures.