Rachel Funk-Johnson radiates positivity and enjoys sharing her message that hope can be found in the darkness. Funk-Johnson has her Master’s in Clinical Mental Health Counseling (CMHC) from UW-Stout. As a Licensed Professional Counselor, she focuses on improving people’s health and wellness through yoga, massage and counseling.

She’s brought her passion for positive growth to downtown Menomonie with her new business, Happy Apple Therapy. But although Funk-Johnson is set on bettering people’s lives, it has been a decade-long journey in growing her Happy Apple.

Funk-Johnson graduated with her communications degree from Brown College in 2004. After graduation, she landed her dream job as a buyer for Marshall Field’s corporate office. But when the recession hit in 2008, there were massive layoffs. Funk-Johnson was let go and lost a second job a year later.

“I felt really disposable,” Funk-Johnson said. “I needed to do some soul-searching and decided what I really wanted to do was help people.”

Ensuring others wouldn’t feel the pain she felt after losing two jobs, and knowing she had the power to change, Funk-Johnson received her certifications in massage therapy, yoga instruction, and health coaching. She remembered her massage instructor said her clients were a reflection of herself. She could see the level of corporate stress they carried; the stress she used to carry, too.

But beyond the stress they carried in their bodies, Funk-Johnson knew many of her clients were struggling with mental and emotional strife as well. As she built a rapport with her clients, some shared their stories with her. Many clients shared concerns beyond her scope of practice.

“Sometimes it’s hard to know who to turn to,” Funk-Johnson said. “But there was trust here. I knew that I had the ability and passion to do more to support them.”

Funk-Johnson began to feel there was a third element missing in her practice. She had the body covered in massage and yoga. What about her clients’ mental health? What more could she do for them?

Funk-Johnson started to research which direction she wanted to go with her career. She decided she could best help others by becoming a Licensed Professional Counselor.  She looked at several programs within the area before she realized UW-Stout’s Clinical Mental Health Counseling was the program she was looking for.

“It was an amazing process of obtaining my degree, learning and growth,” Funk-Johnson said.

Program Director Dr. John Klem helped drive Funk-Johnson into CMHC. She felt he had a real invested interest in her earning her master’s.

“As a business owner in the health and wellness industry for many years, Rachel saw the complicated needs of her clients,” Dr. Klem said. “She realized that she needed additional training to be a more well-rounded and effective helper. During her time in our program, she fully invested herself in both the personal and professional work needed to be become a superb counselor and helper.”

Along with Dr. Klem, Funk-Johnson also found a mentor in Dr. Michelle Hamilton. It was eye-opening for Funk-Johnson to learn that Dr. Hamilton, an eloquent educator, had been a salon stylist before going on the earn her doctorate. Dr. Hamilton’s story made Funk-Johnson believe her earning her master’s degree was a tangible goal.

“Rachel possesses two critical counselor competencies: attentive listening and she easily connects with people,” Dr. Hamilton noted. “Rachel’s values and beliefs are well-aligned with her life, work and personhood. She is an excellent role model for being a genuine Happy Apple.”

Funk-Johnson believes the CMHC faculty and staff supporter her in all realms and helped her to realize her dream of opening Happy Apple.

“Without them, we would not be here!” she said.

Bringing Her Dream to Life

Before graduating with her master’s in May 2018, Funk-Johnson knew she wanted to open her own counseling center. While walking downtown Menomonie with a friend, she passed by 436 Main Street. The building’s main floor was vacant.

“I’ve always loved this building,” she said. “My friend did some investigating and found the landlord’s phone number. Twenty-four hours after talking with the landlord, I signed a lease.”

Knowing her business would focus on therapy, yoga, and massage, Funk-Johnson began thinking of a name for it. Her previous business was called Crabbee Apple, her childhood nickname.

“But I wanted a lighter feel. We’re all about positivity. So, I changed it to Happy Apple,” she said.

After watching the ebb and flow of businesses in downtown Menomonie, and with a lot of love put into the renovation and remodel of the building, Happy Apple opened its doors in October 2018.

“As we are still a very young business, my caseload is still relatively small,” said Abbie Hartung, an LPC-IT at Happy Apple. “I look forward to working with more clients and their diverse needs. We are a place of various kinds of healing to many people.”

In their counseling sessions, they work with individuals, couples, and groups, and men, women, and children of all ages. Their dynamic counseling programs offer different touch-points to provide clients with comfort and coping mechanisms. Many counseling sessions involve talk therapy, but can also include techniques from music, art, play, or other forms of therapy.

Happy Apple has a group counseling room which can double as a waiting room, two individual counseling rooms, and two massage therapy rooms. Funk-Johnson is also planning to add two more rooms in the near future.

And with a yoga studio bathed in natural light with a view of Lake Menomonie, Happy Apple has one of the best views in town.

A Culture of Bravery and Empowerment

One of the many goals Funk-Johnson has for her clients is to build a relationship with them. She wants to understand her clients’ needs and provide the help they might be seeking.

Sometimes, a client may consciously come through Happy Apple’s doors needing one thing, but sub-consciously they may need more. Funk-Johnson knows it takes courage to step forward and ask for help.

“It takes strength to stay after yoga or massage session and maybe sign up for a counseling session. It is empowering,” she said. “One of the best parts of my job is seeing people transition through Happy Apple and better themselves.”

"Changing the way the world receives and perceives therapy"

Funk-Johnson is aware there is a greater world awareness of mental health, but she still feels the stigma surrounding those receiving counseling.

“I thought, ‘Why would we do that?’ We want to eliminate the stigma or the shame someone might be feeling,” Funk-Johnson said.

Happy Apple’s open façade and natural light create a welcoming, open feeling where there’s no need to hide. Its multiple programs set it apart, making it easy to come in the front door, even on busy Main Street.

Funk-Johnson and the staff at Happy Apple are continually developing programs to benefit their clients.

Funk-Johnson and Happy Apple are building relationships in the community, encouraging people to visit, with a goal of making their programs as accessible as possible.

“It’s a grassroots effort to get new people in the door,” she said. “We’re always inviting people to see and feel what’s in the building and what Happy Apple is about.”

“Through ‘Karma Giving,’ when we’re giving our best, the world will give back. It’s our job to give back,” Funk-Johnson believes.

In Fall 2019, Happy Apple is offering free Meditation & Mindfulness Sessions and an LGBTQIA+ Process and Peer Support Group, also available to college students at no cost.

“We want to be a staple in the community,” Funk-Johnson said. “We’re here to stay.” 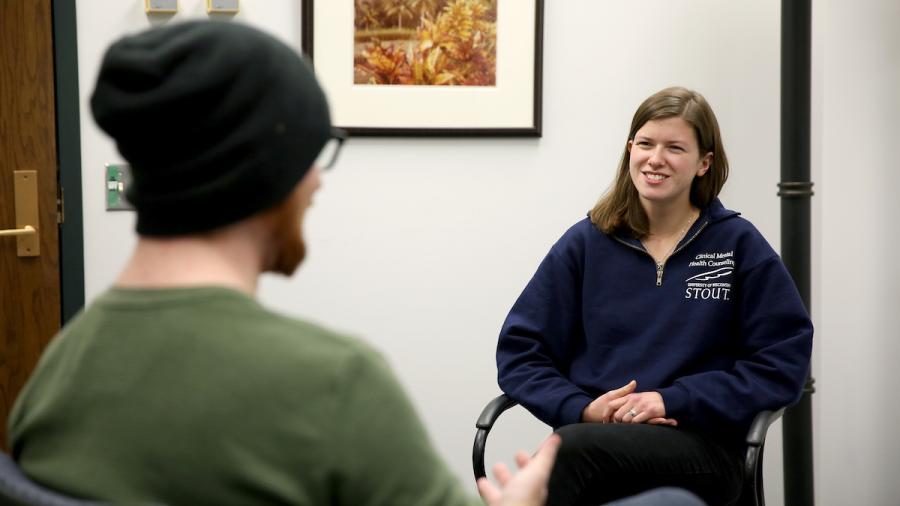 You can make a positive impact on the lives of others by giving competent and ethical services as a mental health counselor.
Learn More