After Shelly Ibach graduated from UW-Stout, she was hired as a management trainee at Dayton’s in Minneapolis and worked 25 years for the company.

In 2013, Facebook Chief Operating Officer Sheryl Sandberg was the talk of the business world with her book, “Lean In: Women, Work and the Will to Lead.” Sandberg inspired female executives around the world with her advice.

A similar piece of business advice, but aimed at a universal audience, was offered Thursday, Oct. 29, at University of Wisconsin-Stout by an executive with another national brand. 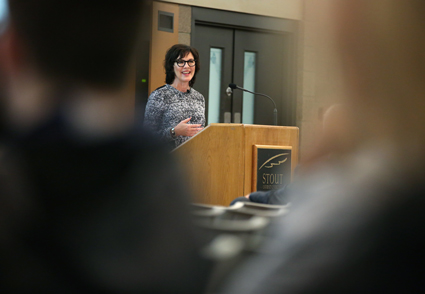 “Lean in to adversity,” Shelly Ibach told male and female students, faculty and staff when she returned to her alma mater as featured executive for the 31st annual Cabot Executive in Residence program.

Ibach is president and CEO of Select Comfort, the Minneapolis-based company known for its Sleep Number beds, SleepIQ technology and bedding products. The company has 475 stores and more than 3,200 employees.

In her address at the Great Hall of the Memorial Student Center, Ibach discussed how several courageous decisions during and after the U.S. recession helped Select Comfort overcome adversity and emerge a stronger and more focused company.

In the depth of the recession in 2008 and 2009, struggling to meet payroll, Select Comfort made three key decisions. First, it decided to sell its products exclusively at its own stores. The goal was to take full control of its own brand.

“We bet our life on that decision, but within 30 days we saw it was the right decision,” Ibach said.

Second, the company cut costs and closed 100 low-performing Sleep Number stores over the course of a year, negotiating to get out of leases.

Third, Select Comfort created a new business model. It had been focused on selling to customers with back pain. It switched course and began to pursue a consumer innovation strategy, offering products that could individualize sleep experiences. Sleep Number beds adjust to fit an individual’s needs, providing what the company believes is a superior night’s sleep for anyone.

“In 2011, we began to get serious about being a consumer-led company. It’s so much bigger than a mattress. It’s about our customers’ sleep experiences. We created a new market. We made mattresses relevant,” Ibach said. 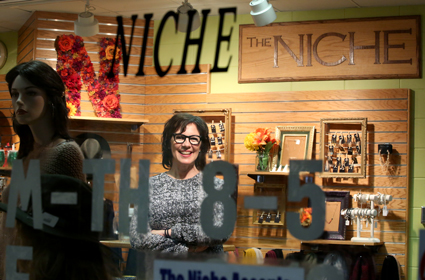 In 2012, when Ibach was promoted from chief operating officer to CEO, the company began investing more in product development and also purchased its only significant competitor in the adjustable air portion of the market. It also began partnering with a Silicon Valley technology start-up focused on biometric measures relevant to sleep.

In 2014, the R&D investments and strategies paid off when the company launched its SleepIQ technology. Bed owners can check their smart phones each morning to get a report — their SleepIQ score —rating their night’s sleep and informing them about the quality of their sleep experience.

With its series of bold moves and mission-driven company culture, Select Comfort leaned into adversity and got results. Net sales rose from $606 million in 2010 to $1.16 billion in 2014. The company’s share price was 19 cents during the recession and has risen to more than $22.

“We’re on the right path,” Ibach said. “We have transformed almost every aspect of our business for sustainable profitable growth.” 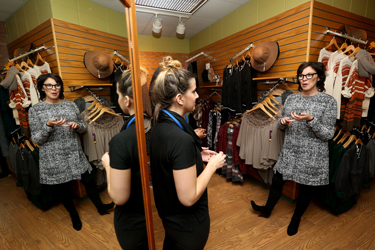 Return to the Niche

Ibach graduated in 1981 from UW-Stout. She was hired as a management trainee at Dayton’s in Minneapolis and worked 25 years for the Department Stores as part of Target Corp. and later for Macy’s.

While at UW-Stout, she was an assistant manager on campus at the Niche, a student-run retail store in Heritage Hall. After her Cabot Executive address on campus, Ibach visited the Niche. 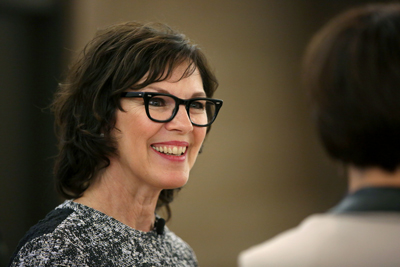 She talked with student employees Tayler Mueller, of Circle Pines, Minn., and Parey Hunter, of Minneapolis, and with instructor George Duychak of the retail merchandising and management undergraduate program.

Ibach quizzed Mueller and Hunter about sales trends and complimented them on the look and design of the store. “It’s warm and inviting. I like how it’s organized and very well thought-through,” Ibach said.

Working at the store was an early springboard to Ibach’s career in retail. “The Niche is such a terrific learning experience,” she said.

Mueller and Hunter liked Ibach’s enthusiasm for retail. “It was cool to see how she’s consumer-oriented,” Mueller said.

As part of her day on campus, Ibach spoke in two classes and met with UW-Stout officials, including Chancellor Bob Meyer and College of Management Dean Abel Adekola.

Second: Scott Cabot visits with Shelly Ibach next to the Cabot Executive in Residence Wall of Honor in Jarvis Hall. The annual program is named after Cabot’s father, Arthur.

Fourth: Shelly Ibach talks with student and Niche employee Tayler Mueller. Ibach worked at the student-run retail store when she was a student at UW-Stout.

Bottom: Shelly Ibach answers a question during her day on campus. 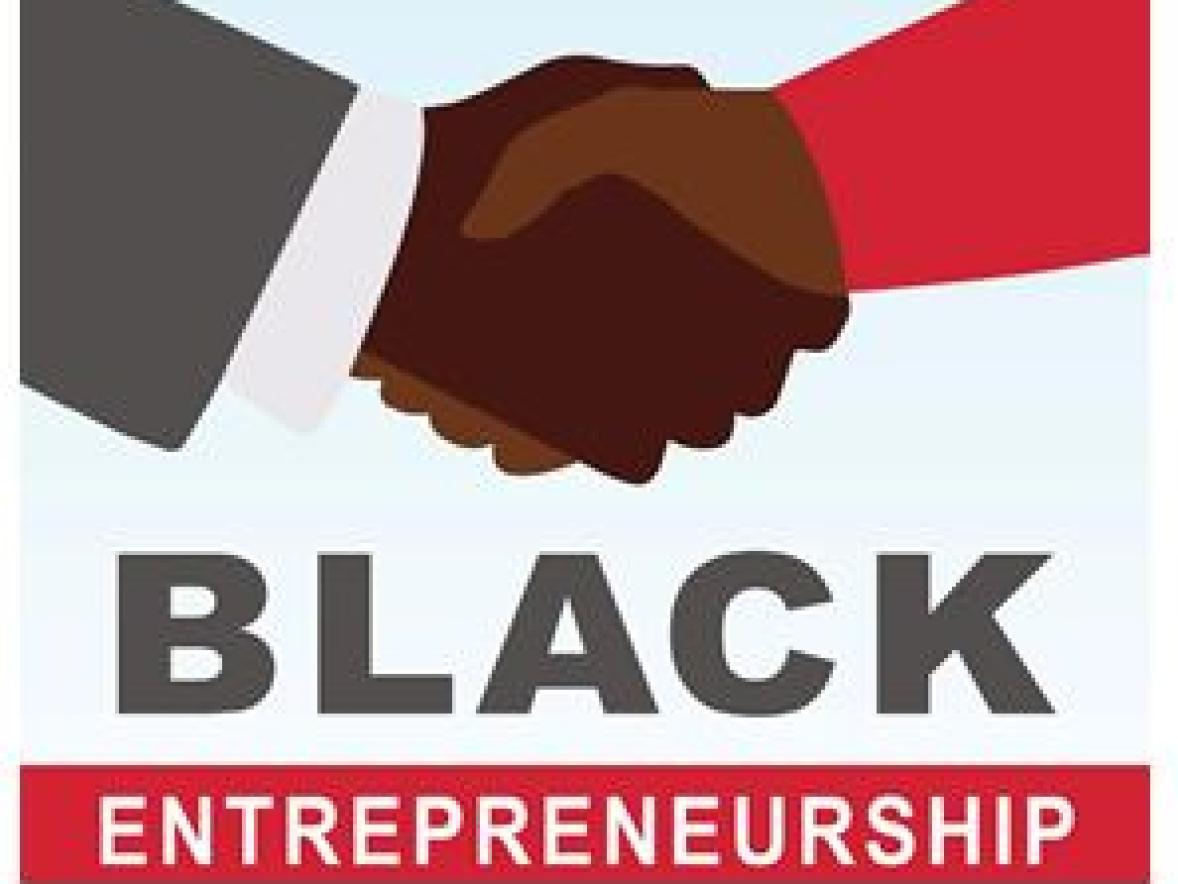 The Black Entrepreneurship program at UW-Stout will feature a business founder and two panelists with extensive industry experience.
November 11, 2022 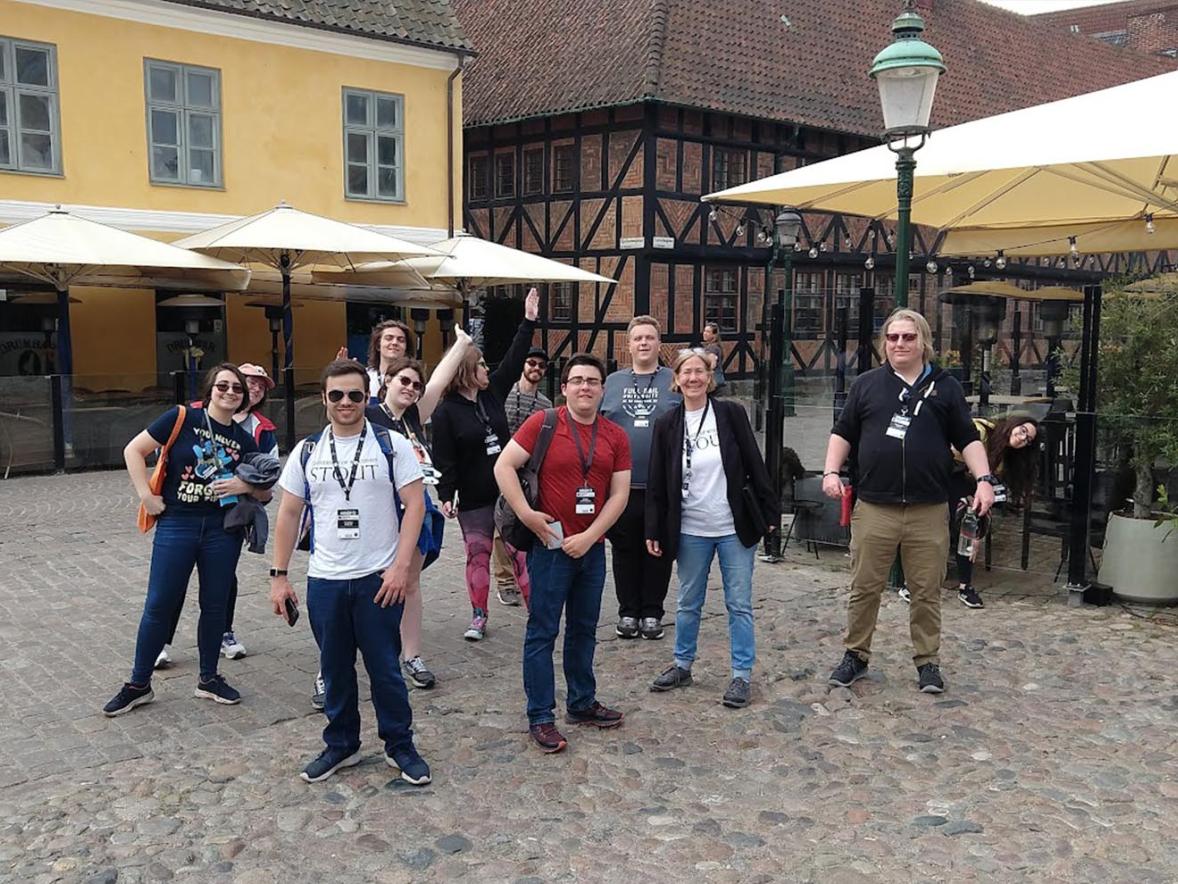 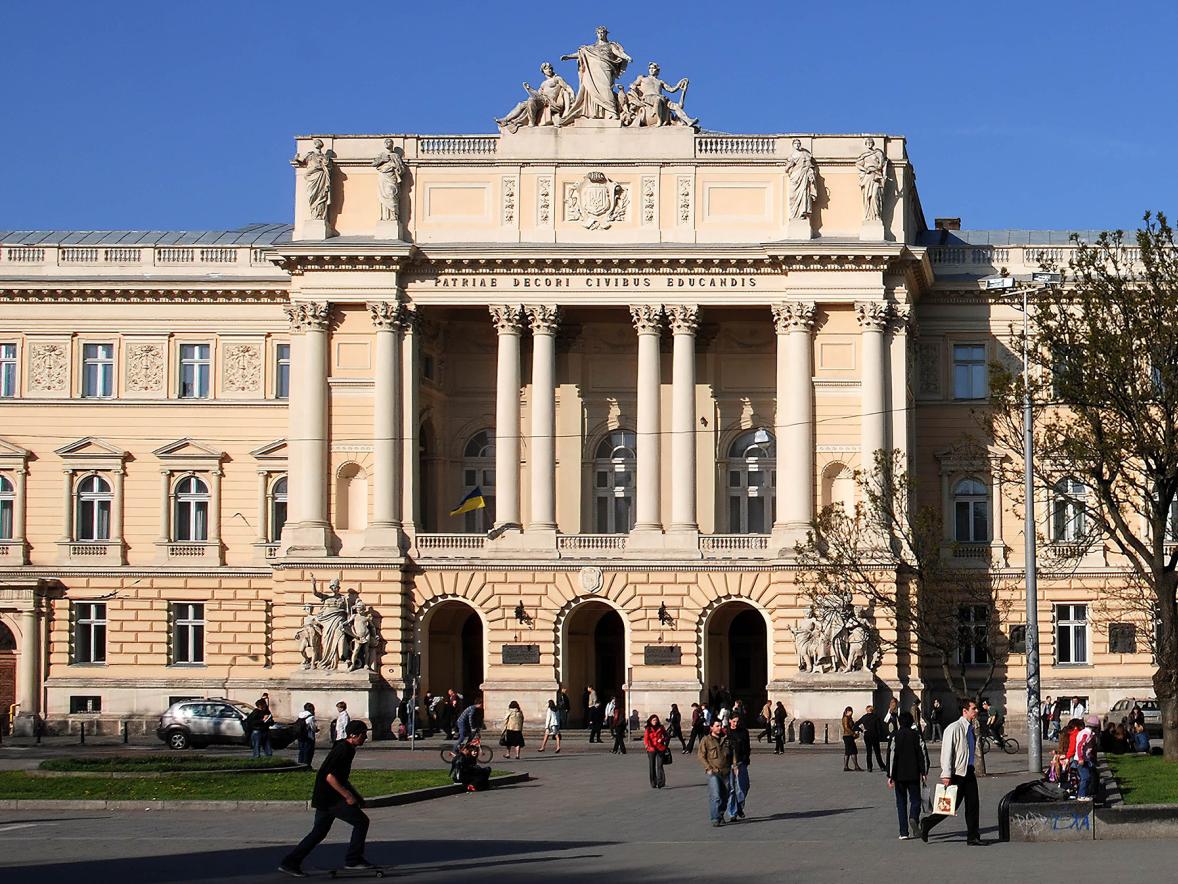 Professor speaks to Ukrainian students about entrepreneurship as war rages

Despite the ongoing military invasion by Russia that has turned their country and their lives upside down, 100 Ukrainian students are thinking about the future.
April 5, 2022